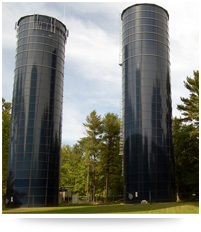 located in Old Town, Maine, has published the results from a recent study that demonstrate the effectiveness of PAX submersible mixers in decreasing system-wide rates of disinfectant residual loss while simultaneously preventing damage from ice inside storage tanks. The article, titled, Fire and Ice: Tame Temperature Extremes in Water Tanks, is featured in the July issue of AWWA’s Opflow magazine.

The operators’ initial motivation for installing PAX mixers was to prevent ice damage during winter. In late 2008, the district installed a submersible potable water mixer in one standpipe and left another standpipe of the same size unmixed as a control. The standpipe without a mixer showed signs of thermal stratification with an ice cap at the top of the tank. By late February 2009, the standpipe with the submersible mixer was free of ice. The unmixed standpipe contained significant ice until late April.

Operators at the Old Town Water District estimate they are saving approximately $1,200 per year on chemical costs, while experiencing less damage to ladders and tank coatings. The submersible mixers, with their efficient design, average approximately $1 per day in electricity charges.

PAX Water Technologies, Inc., a subsidiary of PAX Scientific, Inc., was founded in 2006 with the exclusive right to develop and market energy-efficient mixing and circulation systems based on PAX’s impeller technology for water and wastewater treatment applications.