The Eductor Nozzle puts out a 5 time flow increase to produce a 75-500 GPM upward flow utilizing 50 PSI motive water. This upward flow of water not only provides axial thrust, but also provides a rotational characteristic to the upward flowing stream.

The Tank Shark® Mixing System transfers its applied motive energy to the mass of water in the reservoir, placing it in motion. The nozzle motive energy functions to move colder water from the base of the reservoir up to and on top of the warmer stratified layers. This thermal disruption causes additional mixing beyond the energy associated with the nozzle itself. The extreme velocity at the nozzle discharge provides for self cleaning of the injection nozzles. 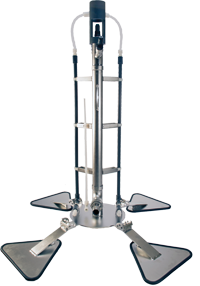